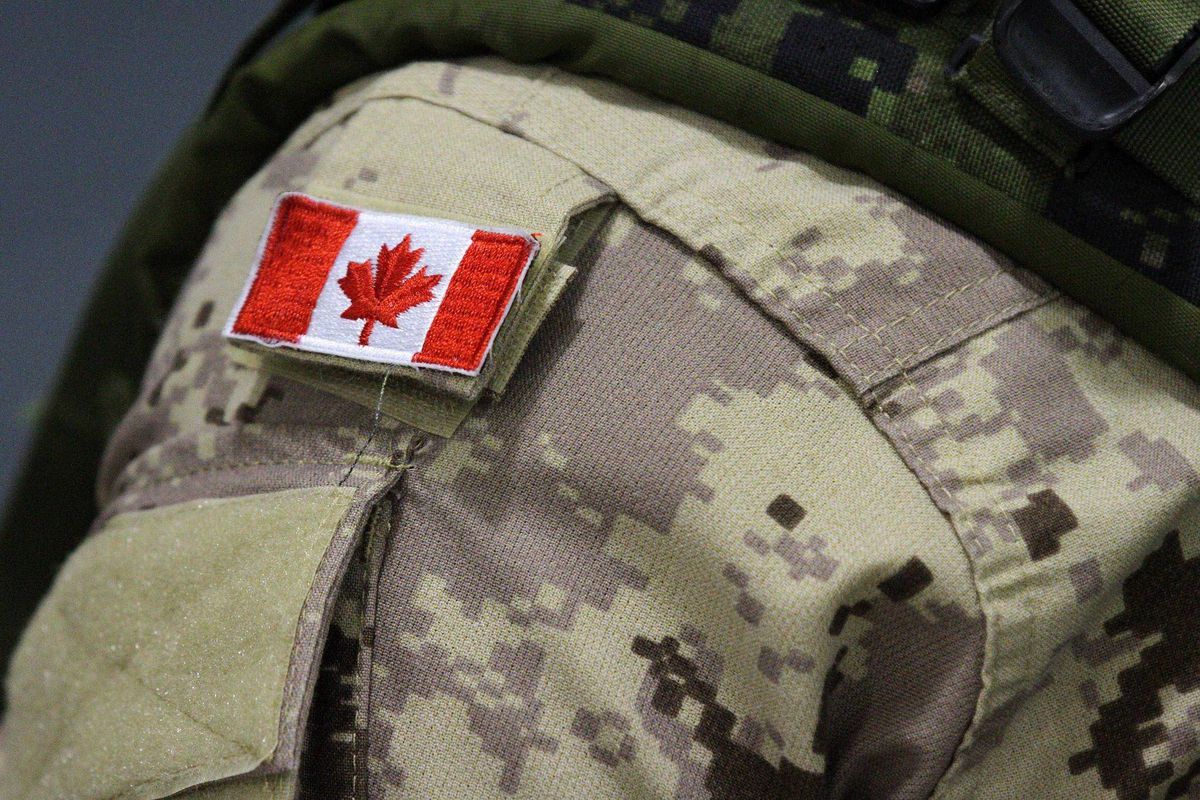 A sniper with Canada’s elite special forces in Iraq has shattered the world record for the longest confirmed kill shot in military history at a staggering distance of 3,450 metres.

Sources say a member of Joint Task Force 2 killed an Islamic State insurgent with a McMillan TAC-50 sniper rifle while firing from a high-rise during an operation that took place within the last month in Iraq. It took under 10 seconds to hit the target. 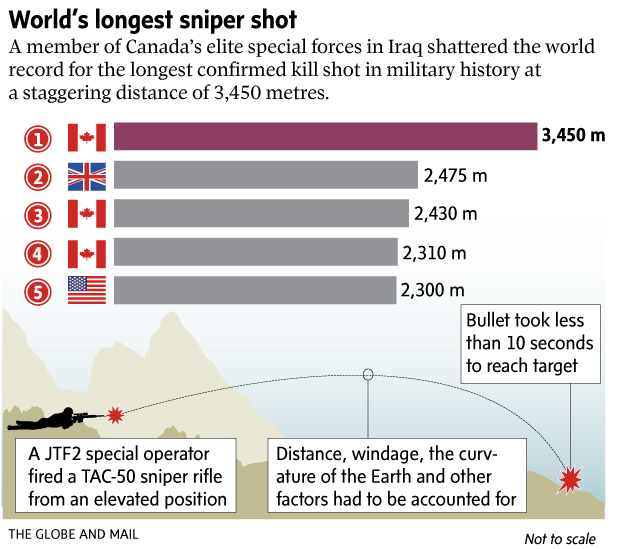 “The shot in question actually disrupted a Daesh [Islamic State] attack on Iraqi security forces,” said a military source, who stressed the operation fell within the strictures of the government’s advise and assist mission. “Instead of dropping a bomb that could potentially kill civilians in the area, it is a very precise application of force and because it was so far way, the bad guys didn’t have a clue what was happening.”

The kill was independently verified by video camera and other data, The Globe and Mail has learned.

“Hard data on this. It isn’t an opinion. It isn’t an approximation. There is a second location with eyes on with all the right equipment to capture exactly what the shot was,” another military source said.

A military insider told The Globe: “This is an incredible feat. It is a world record that might never be equalled.”

The world record was previously held by British sniper Craig Harrison, who shot a Taliban gunner with a 338 Lapua Magnum rifle from 2,475 metres away in 2009.

Previously, Canadian Corporal Rob Furlong had set the world record in 2002 at 2,430 metres when he gunned down an Afghan insurgent carrying an RPK machine gun during Operation Anaconda.

Weeks before, Canadian Master Cpl. Arron Perry briefly held the world’s best sniper record after he fatally shot an insurgent at 2,310 metres during the same operation. Both soldiers were members of the 3rd Battalion Princess Patricia’s Canadian Light Infantry.

JTF2 special forces are primarily tasked with counterterrorism, sniper operations and hostage rescue. Much of the information about this elite organization is classified and not commented on by the government. The unit’s snipers and members of Canadian Special Operations Regiment, who are carrying out the main task of training Kurdish forces, have been operating in tough conditions in Iraq.

The Trudeau government pulled CF-18 fighter jets out of Iraq in 2016 but expanded the military mission, which will see the number of Canadian special forces trainers climb to 207 from 69 in an assist, train and advise mission. Canadian commandos are not supposed to be involved in direct combat, but are authorized to go up to the front lines on training missions with Kurdish Peshmerga fighters and to paint targets for coalition air strikes.

For operational security reasons, sources would not reveal the names of the elite Canadian sniper and his partner, nor the location where the action took place.

A sniper and his observer partner are often sent to remote and dangerous locations to hunt down insurgents while having to carry heavy equipment. Once they have located the target, snipers follow the same methodical approach before each shot. Breathe in, out, in, out, find a natural pause and then squeeze the trigger.

Canada has a reputation among Western military forces for the quality of its snipers, despite the small size of the Canadian Armed Forces compared to the United States and Britain.

“Canada has a world-class sniper system. It is not just a sniper. They work in pairs. There is an observer,” a military source said. “This is a skill set that only a very few people have.”

The skill of the JTF2 sniper in taking down an insurgent at 3,450 metres required math skills, great eyesight, precision of ammunition and firearms, and superb training.

“It is at the distance where you have to account not just for the ballistics of the round, which change over time and distance, you have to adjust for wind, and the wind would be swirling,” said a source with expertise in training Canadian special forces.

U.S. Sergeant Bryan Kremer has the longest confirmed sniper kill shot by a U.S. soldier. He killed an Iraqi insurgent with his Barrett M82A1 rifle at 2,300 metres in 2004.