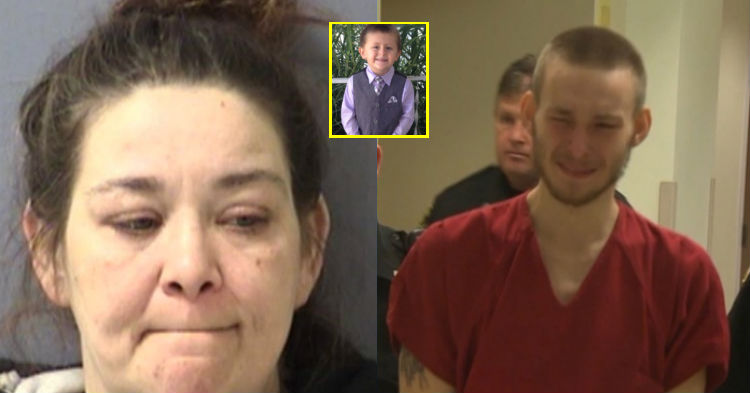 No crime is more heinous than a murder or sexual assault against a child. And this 20-year-old man is accused of both. The unconscious child was found by police and they started to hunt down Keith Lambing. When they found him hiding in his mother’s home, the sick grin he bared when they handcuffed him for the horrible charges is enough to turn your stomach.

Little Bentley Miller was raped and murdered and was found in the car of 43-year-old Kristen Herold on Tuesday. The death was ruled a homicide and the community of Butler is reeling…

Although the boy was rushed to the nearby hospital, nothing could be done for him. He was pronounced dead at the hospital. And now his family and the community are grieving his loss.

Bentley died of severe blood loss due to forced sodomy. But that wasn’t all. Lambing also apparently burned the boy’s left hand and had allowed it to go untreated. Bentley also had bruising on his head, torso, and extremities consistent with being held forcibly from behind. And police are pointing their fingers at Lambing.

“I have never seen anything like it [in] 22 years as an attorney,” District Attorney Richard Goldinger told WTAE-TV. “It’s horrific. It’s unimaginable that somebody could actually do this to any human being, let alone a 4-year-old.”

Herold told the authorities that she picked Bentley up at the Super 8 Motel on Pittsburgh Road. Her son, Keith Lambing and been living there for several months with his girlfriend, her son Bentley, and their 4-month-old baby.

On Tuesday morning things got strange. Early in the morning, Lambing called his mother with urgent business. He claimed that Bentley was having a medical emergency (forced sodomy would do that to a child), and needed Herold to pick him up.

Later, Lambing was found hiding in an abandoned home’s attic with his mother. They were located just one day after Bentley was confirmed dead.

After Monday, Lambing was slammed with numerous charges and if convicted will be away for life. But the prosecutors are pushing for the death sentence.

Prosecutors feel like the death penalty is the right choice.

“It would appear on its face, it asks for the death penalty,” Goldinger told KPHO-TV.

Meanwhile, Herold was charged with hindering arrests and endangering the welfare of a child. And Lambing’s girlfriend, 21-year-old Mackenzie Peters, was charged with two counts of child endangerment on Thursday – nine days after Bentley’s death.

The local community was shocked and horrified by the heinous crime. They wrote numerous complaints on Facebook.