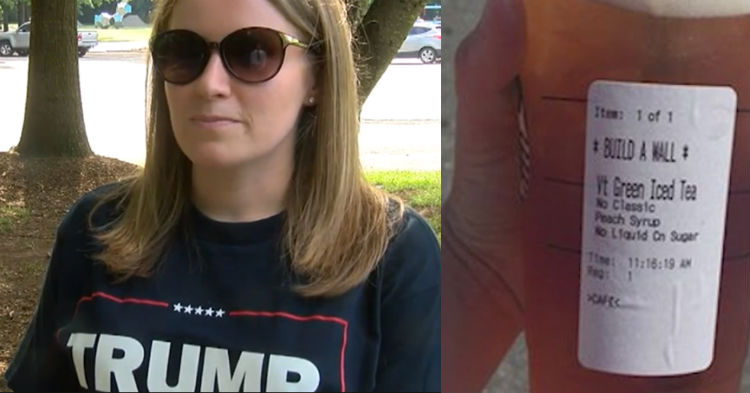 According to their corporate website, Starbucks’s mission is “to inspire and nurture the human spirit – one person, one cup and one neighborhood at a time.” But that’s not what happened when a Republican wearing a Trump t-shirt walked into the coffee shop. Instead of greeting the customer with an attitude to “inspire and nurture the human spirit,” the angry Starbucks barista began berating the Trump supporter and bullying her. Now the giant coffee corporation is going to have to answer for this employee’s rudeness.

Because Kayla Hart thought Starbucks was a place to “nurture the human spirit,” she entered her local coffee shop in Charlotte, North Carolina in the Dilworth neighborhood. Instead of being greeted with a smile and an iced tea, she left feeling humiliated. Because she wore a t-shirt supporting President Donald Trump, the Starbucks barista bullied her in public, embarrassing her.

Not only did the cashier laugh in Hart’s face because of her political views, she continued to bully the Republican.

When she received the drink she overpaid for, instead of seeing her name “Kayla” written on the said, the barista wrote, “BUILD A WALL.”

Hart expressed her disappointment in Starbucks for their anti-Trump propaganda.

“I don’t know what politics has to do with getting a cup of coffee. I just walked out because everyone was staring. I just found it really sad that I can’t wear a t-shirt with our president without being made fun of,” Hart told Fox 46.

Not only did Trump win the presidency, proving that American wanted him, but the shirt had no other political message besides who to vote for.

Kayla Hart is taking the high road. Instead of discouraging Republicans from buying Starbucks coffee or boycotting the chain altogether, she is just trying to raise awareness.

Kayla did report the incident to Starbucks customer service and is waiting to hear back from the district manager before she decides if she’ll visit her local shop again.

Because they made a mistake, Starbucks released an official apology:

“We failed to meet this customer’s expectations of us, and we have apologized and are working directly with her to make it right. We have spoken with our store partners about this situation and are using this as a coaching opportunity for the future.”

Hart is glad her story is being heard.“I just want it to be put out there so people know this is what’s occurring,” Hart added. “I don’t think it’s right you should be humiliated for wearing a t-shirt with your opinion on it.”

Readers on Daily Mail generally agreed with Kayla Hart. The liberals want to dish it out but they can’t take the heat.

“Yes it’s pretty sad you get treated like dirt for being a Trump supporter from the compassionate tolerant lefties. Why go to Starbucks with their lousy coffee,” shared a reader from Tampa, Florida.