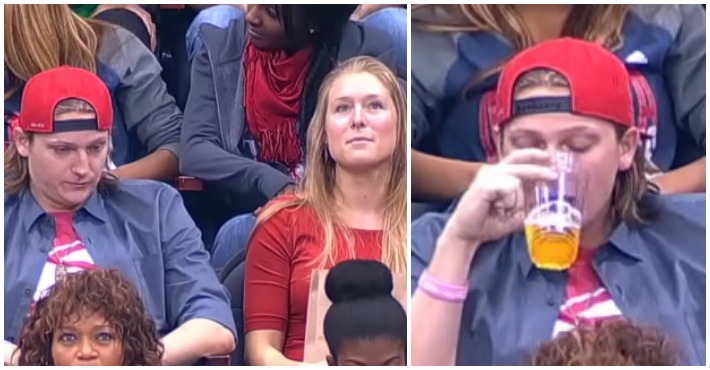 The rules of kiss cam are simple: If you find yourself on the big screen, you have to kiss the person next to you. Otherwise, be prepared to suffer the boos and uncomfortable drive home.

Allowances can be made for those sat next to a family member, but you can at least sacrifice a peck on the cheek rather than let the awkward moment play out to the masses. But since kiss cam has become ubiquitous with American sports, we’ve been subject to our fair share of discomfort.

Sometimes the couple will sit and refuse. Sometimes one is far more into it than the other. Sometimes you’ll even see a very public marriage proposal. It’s a risk, but an endlessly entertaining one. It’s a nice positive diversion from a tense game that may not be going your way.

The positivity wasn’t shining through in this basketball game at the Philips Arena. The Atlanta Hawks were facing off against the Brooklyn Nets and, during a break, kiss cam started as usual. We cycle through a number of couples who see themselves on the big screen and turn to each other to comply with the widely-accepted rules.

Some play it up for laughs, some are polite and some just go for it. But they all go with the flow without much fuss. Well, almost all of them do. One couple hit a bit of a roadblock when one had a little less enthusiasm for the gimmick than the other.

Not exactly looking like a barrel of laughs in the first place, this guy looks far more interested in his beer than any conversation with his other half. After a few seconds, his girlfriend notices they’re on kiss cam and turns to him to get a kiss for the crowds. Unfortunately, he’s having none of it. But she gets some revenge…

The video was put up on YouTube by the Atlanta Hawks, where it was captioned: “A man turned down a kiss from his girlfriend when the kiss cam was on them Wednesday night, so she decided to kiss someone else instead.” The video has now amassed over three million views.

One commenter stated: “Proving yet again, after 21, guys who wear their caps backwards never grow up. Run girl! Run!” However, a considerable number of the responses haven’t taken the video so seriously. A number of viewers claim that the video is faked by the team to go viral, citing the bad performance of the “actors” as the primary reason.